I gave a talk at SciPy 2013 titled open('dev/real_world') Raspberry Pi Sensor and Actuator Control. You can find the video on youtube, the slides on google drive and I will summarize the content here.

Use a Raspberry Pi to read in accelerometer value and to control a servo motor.

In this article I will go over four basic Python projects to demonstrate the hardware capabilities of the Raspberry Pi. Those projects are:

An LED is a Light Emitting Diode. A diode is a circuit element that allows current to flow in one direction but not the other. Light emitting means ... it emits light. Your typical LED needs current in the range of 10-30 mA and will drop about 2-3 volts. If you connect an LED directly to your Pi's GPIO it will source much more than 30 mA and will probably fry your LED (and possibly your Pi). To prevent this we have to put a resistor. If you want to do math you can calculate the appropriate resistance using the following equation:

But if you don't want to do math then pick a resistor between 500-1500 ohms. Once you've gathered up all your circuit elements (LED and resistor), build this circuit on a bread board: 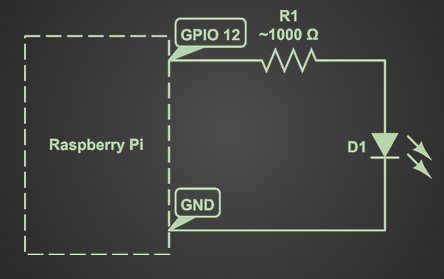 thats not so bad, is it?

The code is also pretty simple. But first you will need to install RPi.GPIO. (It might come preinstalled on your OS.)

The important lines basically are:

These lines of code setup pin 12 as an output, and then output a 1 (3.3 volts). Run the above code connected to the circuit and you should see your LED blinking on and off every half second.

A pot is short for potentiometer, which is a variable resistor. This is just a fancy word for knob. Basically by turning the knob you affect the resistance, which affects the voltage across the pot. (V = IR, remember?). Changing voltage relative to some physical value is how many sensors work, and this class of sensor is known as an analog sensor. Remember when I said the GPIO pins can only represent a binary state? We will have to call in the aide of some more silicon to convert that analog voltage value into a binary stream of bits our Pi can handle. 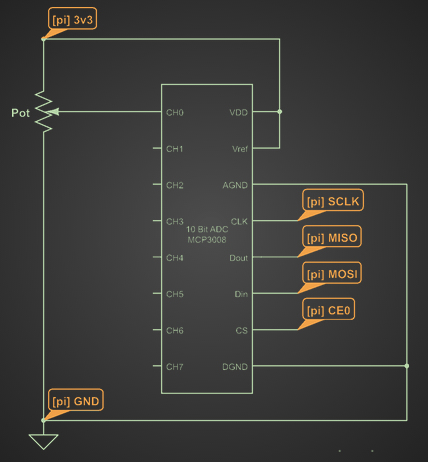 To talk to the chip we will need a python package called spidev. For more information about the package and how it works with the MCP3008 check out this great blog post

With spidev installed and the circuit built run the following program to read live sensor values and print them to stdout.

The most important parts are these two lines:

They send the read command and extract the relevant returned bits. See the blog post I linked above for more information on what is going on here.

To stream data over the wire we will be using the ØMQ networking library and implementing the REQUEST/REPLY pattern. ØMQ makes it super simple to set up a client and server in Python. The following is a complete working example.

Now we can use traits and enaml to make a pretty UI on the client side. Check out the acc_plot demo in the github repo to see an example of the Pi streaming data over the wire to be plotted by a client.

Servos are (often small) motors which you can drive to certain positions. For example, for a given servo you may be able to set the drive shaft from 0 to 18o degrees, or anywhere in between. As you can imagine, this could be useful for a lot of tasks, not least of which is robotics. 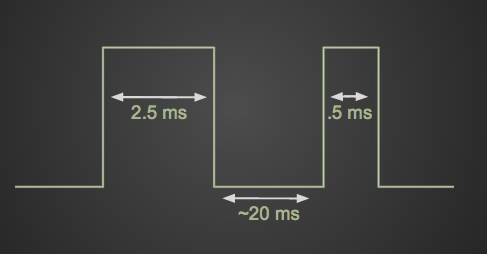 The pulse width is much more critical than the frequency

These kind of timings are not possible with Python. In fact, they aren't really possible with a modern operating system. An interrupt could come in at any time in your control code, causing a longer than desired pulse and a jitter in your servo. To meet the timing requirements we have to enter the fun world of kernel modules. ServoBlaster is a kernel module that makes use of the DMA control blocks to bypass the CPU entirely. When loaded, the kernel module opens a device file at /dev/servoblaster that you can write position commands to.

I've written a small object oriented layer around this that makes servo control simpler. You can find my library here:

Simple connect the servo to 5v and ground on your Pi and then connect the control wire to pin 4. 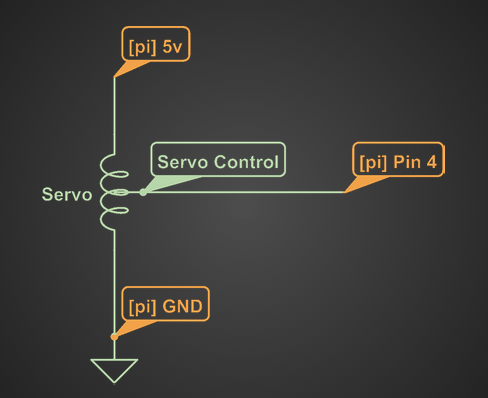 The python code is quite simple:

All you have to do is instantiate a servo and call its set() method with a floating point value between 0 and 1. Check out the servo_slider demo on github to see servo control implemented over the network.